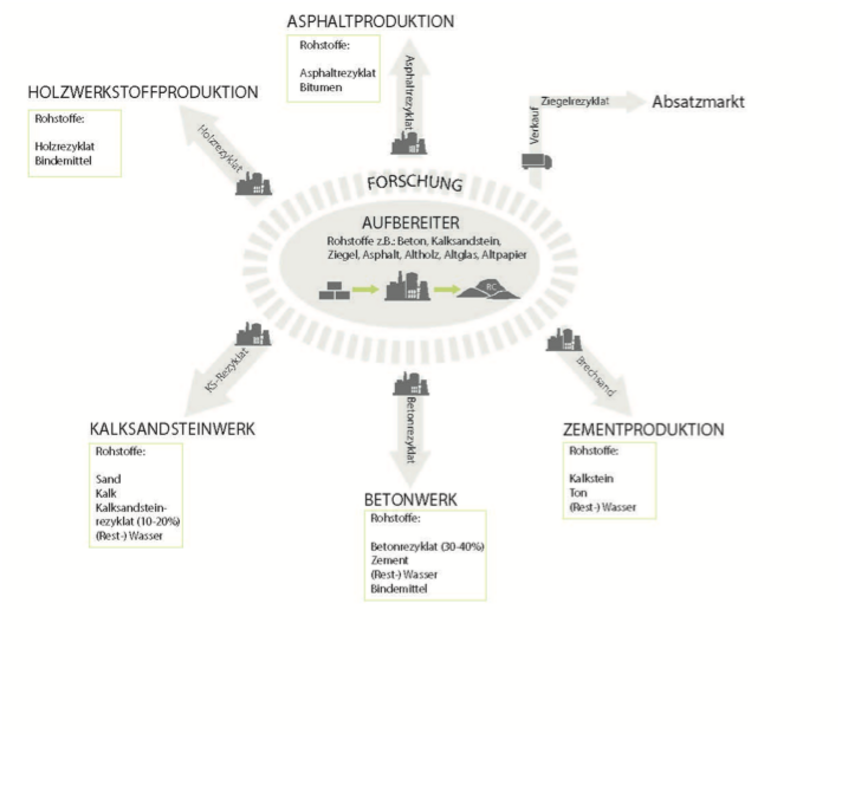 Against the background of politically claimed climate protection goals the Rhine territoryfaces major challenges. The region, which is characterized by coal mining, is gradually undergoing a change in its economic and spatial structure. Areas of fossil energy production will become available in the future and can be used for new purposes. In addition, buildings and its substance must be examined referred to their usability for further resource-efficient recycling. Industrial sites in strategically important locations allowing to continue usage of existing infrastructure. Furthermore, the existing buildings provide potential demolition material which can be processed. These fundamentals offer opportunities for an industrial park for circular construction(IKB). Thus, a basic concept was developed with the objective of drawing up a site-specific structural plan.

In order to determine the aims, strategies and principles of such an industrial park, comparable parks in an international context were analysed. Of a total of 60 parks analysed, 8 proved to be precedents, including the “Lippewerk”and the “Chempark” (GER), the “Eco Industrial Park Kalundborg” (DK), or the “Blue City” (NL). The industrial and business parks were examined concerning different issues such as the establishment of material cycles, building value added chains, infrastructural aspects like waste, energy, water and park management and finally, research and visitor opportunities. All these issues were evaluated for their transferability to the IKB.

Following the analyses, site-specific fundamentals were identified which can be traced back to the peculiarities of structural change in the coal-mining area. Potential sites in the region, such as disused power plants or barracks in the Rhine territorywere selected and examined with regard to possible networks between research facilities, demolition and dismantling companies, building material recyclers and material purchasers within a catchment radius of 50 km. Furthermore, the accessibility, temporal availability and natural environment were considered to evaluate the sites. The location of the Frimmersdorf power plant was convincing compared to the other locations.

In a next step, the normative processes relevant for the conversion were analysed. The procedure of the construction law as well as nature conservation and emission protection law were implemented in a flow chart that can serve as an orientation aid for approval and modification process. Finally, two structural plan variants could be worked out, which are not only presented conceptually and in their structural steps, but also in a design.

The concept of the conversion of the power plant site is divided into three parts: The southern part, the historical power plant, and the recycling centre in the north of the area serve as anchor points for the entire industrial park, creating a bracket that allows and strengthens a mix of industries in the middle. The connection of the two parts in the north and south is made via an axis, which is also used to create addresses for the companies. The two options for implementing the park differ in their focus – in one option the focus is on business, research and development and in the other on production and processing of raw materials. All clusters are to be included in both variants with a stronger weighting in each case. Both variants aim to fulfil the guidelines from the previous analysis and to consider all relevant use categories of material flows and recycling, communication and data exchange, logistics and infrastructure as well as energy and water cycles and connections.

You can find the full text online